Latin Readers and Workbooks for Homeschoolers

“Once upon a time…” may well denote some of the most used words in children’s literature.  As we all know, these tireless little words have been mesmerizing young minds –and old– since the beginning of time. How’s that for packing a punch?  Now you may harness their captivating power further with Laurelwood Books Latin Readers and Workbooks. 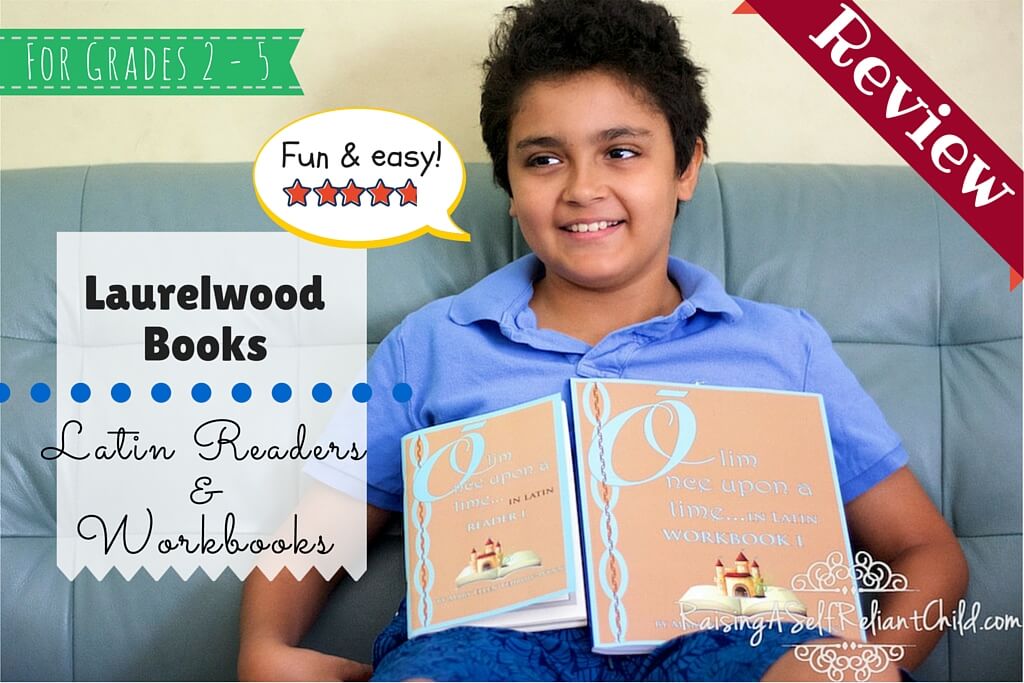 Laurelwood Books is a type of marketplace for many popular, third-party homeschooling curricula, mostly Christian. They also sell their own label books, such as the Olim series.  Although there are some Christian stories in the Olim Latin readers, most are age old stories and fables quite familiar to children. For example, Olim, Once Upon a Time in Latin, Reader 1 includes the following:

And these are the stories in Olim, Once Upon a Time, In Latin Reader II:

So each reader in the series has two to three stories.  Each story begins with its English version in large print, and plentiful nice pencil illustrations. Being the first in the series, Olim, Once Upon a Time, in Latin, Reader 1 offers short, crisp paragraphs, fitting for young elementary children. Then comes the Latin version. Each page presents only one corresponding paragraph now in Latin. If a paragraph is very short –a sentence or two, it’s tagged on to the next regular paragraph on a single page.  The matching illustrations appear alongside, serving also as a handy reference.  The sidebar holds the Vocabulary and a Key. The Vocabulary is, in effect, a Latin-English glossary.  The Key points out grammar elements like adjectives and direct objects. Last on the page, a “stop” icon, alerts the child it’s time to pause the reading, and pick up the workbook. 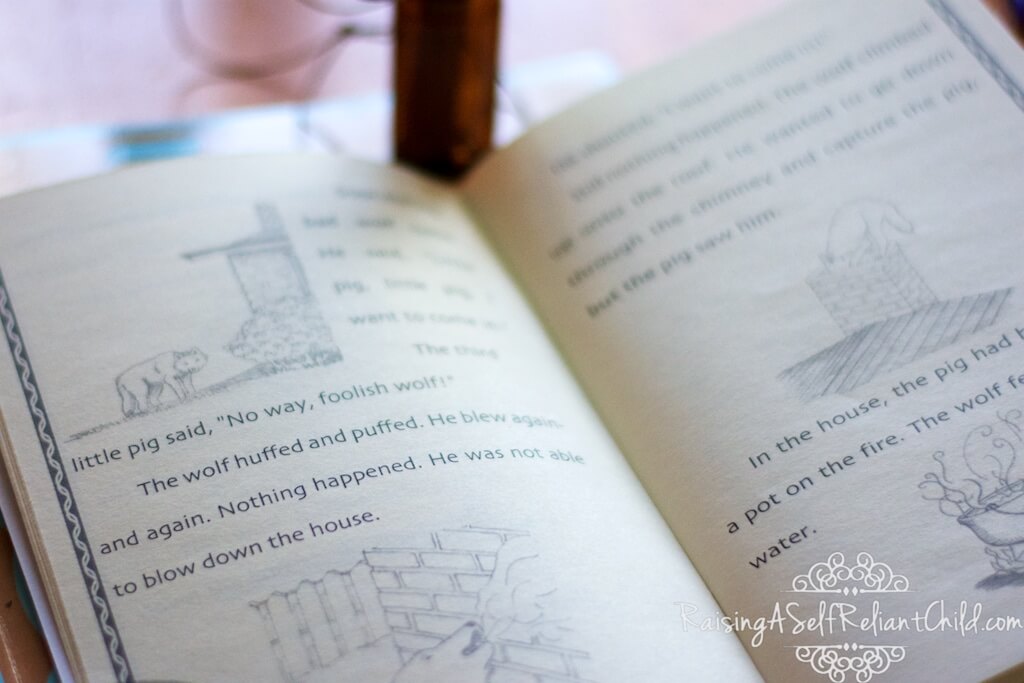 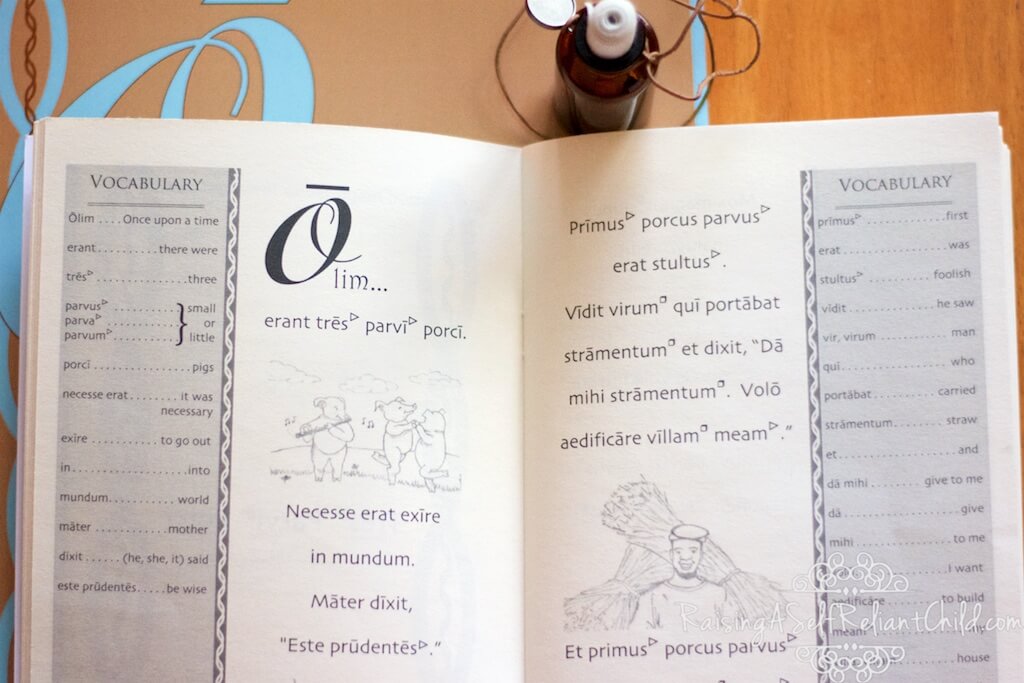 The reader instructs the child to the corresponding workbook exercises. These range from translations from Latin to English, and viceversa, fill in the blanks, and matching with lines. A “Digging Deeper” section appears after each exercise set. It contains extra grammar notes or relevant highlights.  A worksheet usually follows “Digging Deeper.” 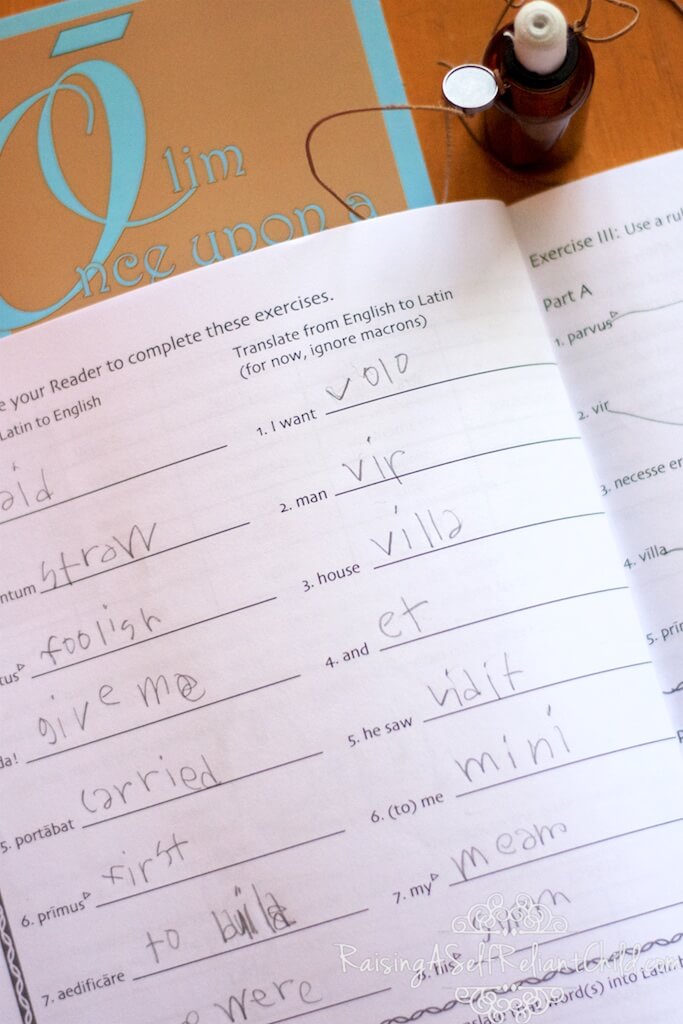 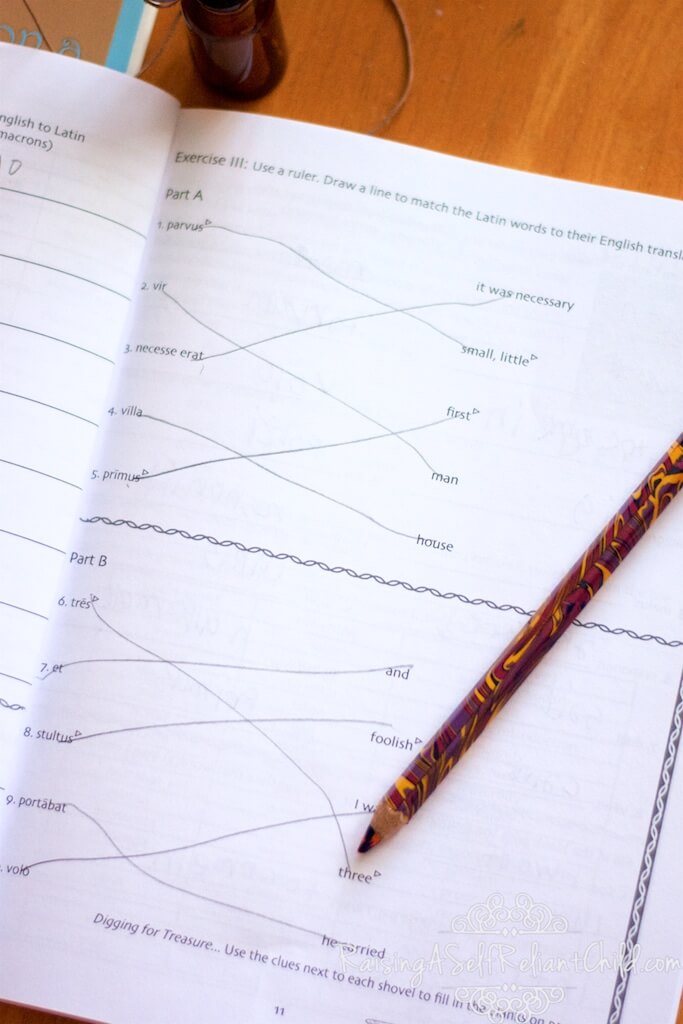 A useful Pronunciation Guide appears at the beginning of both, the reader and the workbook. Also in the beginning, there’s a chart with roman numerals up to 60. 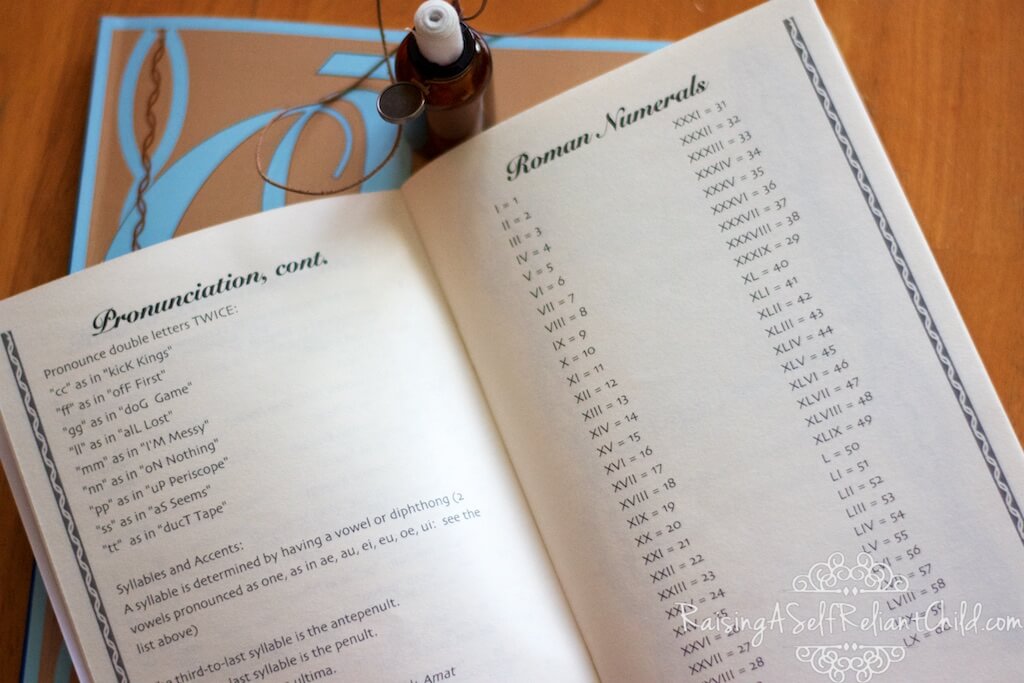 Though the series gets progressively more advanced, you need not begin with Reader 1.  Each set of books is independent of one another. Thus, you may select any number you fancy within the series, and follow any order.  Of course, it makes sense to start with the easiest and gradually proceed. This is so especially if your child’s just getting started with Latin.

How We Used Olim, Once Upon a Time in Latin

Both, Super Hero and I, have been reading  Olim, Once Upon a Time, in Latin, Reader I several times weekly.  The English version is such an easy read. I suspect it would be so for almost any child who’s already read, or heard, these stories.  Afterwards, with each Latin page, I read it aloud at least twice, and so does Super Hero. The reader’s intro does suggest reading each segment several times to enhance retention. The reading’s so short that even doubling (or tripling) it takes us only a few minutes to finish.

Since Spanish is my native language, I feel I may have an advantage, particularly with pronunciation. If not, at least I have that illusion. Still, I find myself consulting the pronunciation guide often. I want to ensure I’m leading Super Hero in the right direction, although he doesn’t really need my guidance. One, because the reader presents it all so clearly. And two, because his interest for word roots led him toward Latin a few years ago. He has been studying the language, on and off,  for a while. Thus, he’s somewhat familiar with its grammar and pronunciation.  I’d like to think he, too, may have the advantage of his native command of Spanish. Perhaps I might have influenced him with my own illusions as well. 😉

Silly illusions aside, and of real consequence, this format’s explicit and easy to follow. Perfect for the complete novice, and the child familiar with Latin, alike.  The bit sized pieces succeed in capturing Super Hero’s attention. He’s developing his vocabulary and deepening his understanding of Latin grammar. All while enjoying a timeless, kid-tested story!

Completing the workbook exercises is quick and easy. Super Hero finishes them in no longer than 10 minutes or so.  Last, I appreciate the smart wrap up with valuable explanations in “Digging Deeper.” 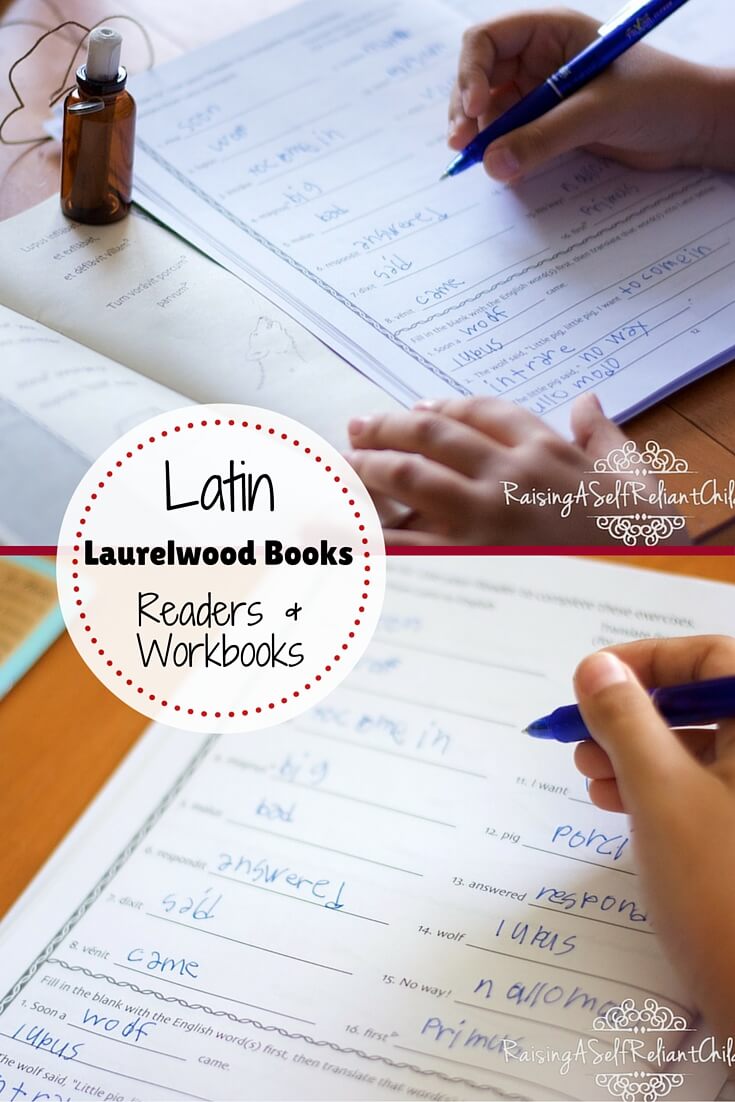 Olim, Once Upon a Time, in Latin’s been a delight for both of us. Super Hero’s always willing to sit down come Latin time. We usually do it together, but he reads and completes the exercises all by himself, even if I can’t join. (He generally prefers I tag along during lessons.) He does make an exception with “Digging Deeper.” For that, he’ll wait till I can read it to him. It is, after all, a “lesson” not a story.

I like the reader’s and workbook’s format. We do stay away from boring workbooks, but this one is not one them. The simple, nondemanding exercises get done with no grumbles.  I also like the pronunciation guide. It’s very useful. Yet, it would be wonderful if the audio version were available as well. A plain recording posted on their website would suffice.

Being secular homeschoolers, it is important for us to keep a nonreligious perspective. Laurelwood Books’ Olim, Once Upon a Time, in Latin does meet our can-use criteria.  Its Christian stories seem to be those popular that so permeate our culture, it’d be sensible for Super Hero to be versed in them anyway. Why not doing so via one of his own interests? Sounds reasonable enough to me!

If your child’s interested in Latin, you just can’t go wrong with Olim, Once Upon a Time, in Latin. Simply a delightful way to learn the language! We can’t wait to get our hands on the entire series.

If so, there’s plenty more reviews from my fellow Crew members. Or just pay these folks a visit at any of their social media accounts. That’ll give you an immediate feel for what they’re all about:

I received a free copy of this product through the Schoolhouse Review Crew in exchange for my honest review. I was not required to write a positive review, nor was i compensated in any other way. All opinions are my own or those of my family. I am disclosing this in accordance with the FTC Regulations.