If you’ve been following us for a while, you probably know we’re big fans of math games around here at our homeschool. We love math games so much, Roberto and I even taught math games classes at our co-op for a few semesters a while ago. It was much fun for Super Hero. He actually learned a lot trying to teach kids younger than him. He was, after all, our “class assistant”  and he took much pride in his role. So, when he learned about Sunya Publishing’s math game: Sunya – The Magic and Wonder of Math and Science Multiplying & Dividing, he very much wanted to play it.

We received the math game from Sunya Publishing:  Sunya – The Magic and Wonder of Math and Science Multiplying & Dividing. The packet includes the following: 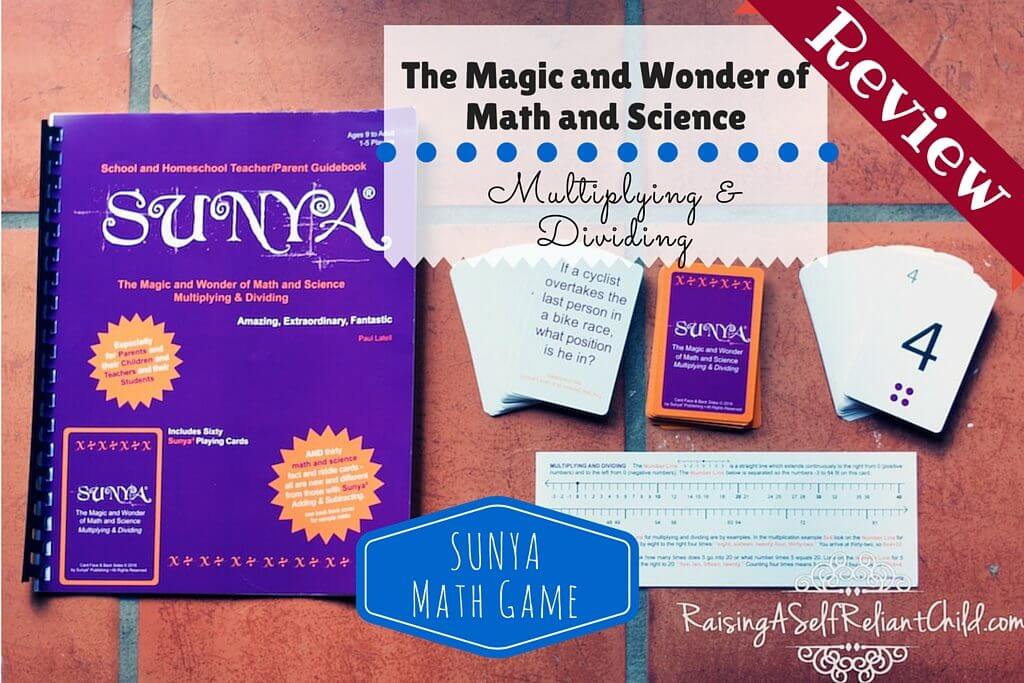 Our Experience with Sunya

Visiting the publisher’s website will likely not give you the best of first impressions. There’s very little information; and what you find probably won’t leave you satisfied with what the game is all about.  Likewise, the instructional booklet has a rather homemade feel to it.  Ours came with its plastic comb binding partially undone.  Not a big deal at all, and it most certainly does not detract from the game experience. Yet, I felt a mention here was needed in the spirit of honesty and full disclosure. 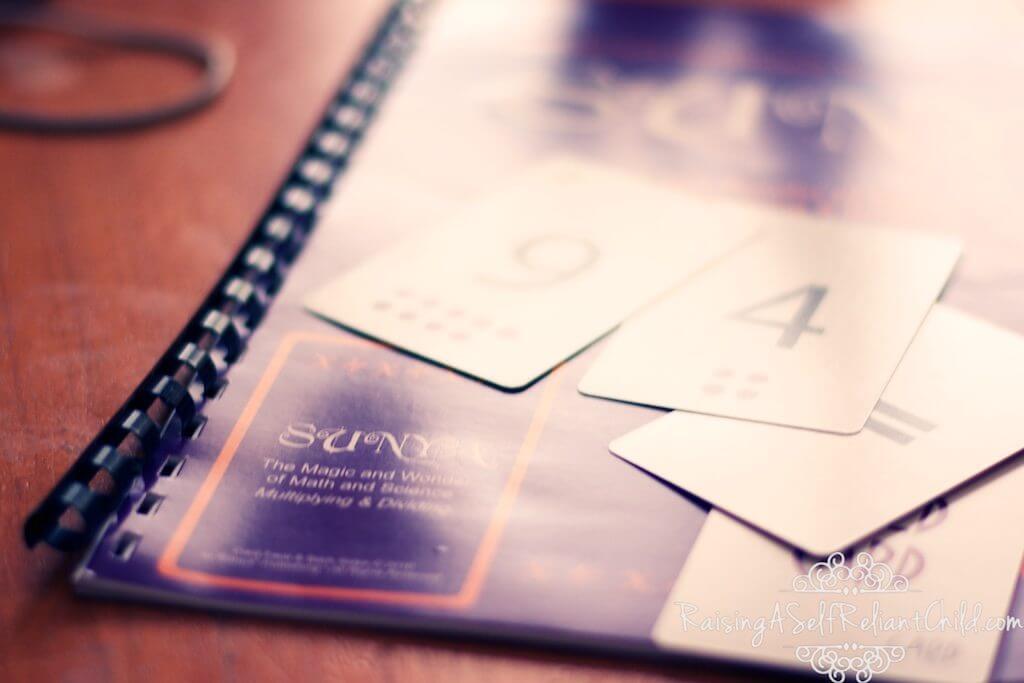 When the time came for us to play, Super Hero, who’s usually gung-ho about reading the instructions, took the book eagerly, leafed through it, and handed it back to me shortly after. “You read the rules” he asked.  I did.  No wonder he’d been put off. The instructions were wordy, long, and unclear. It took me a couple (or more) tries to get the gist of it.  We then started playing. Our friend Bella joined us the first time around. Both children giggly with anticipation.

Actually playing the game was super fun.  The object of the game is to create math sentences using the original sentence and changing only up to 2 cards in that sentence. The first person who uses up all his cards wins.  You may replenish your cards one after each round. When Bella couldn’t make a sentence, she started replenishing non stop from the stash. This led both, Bella and Super Hero, to start introducing their own inventive twists. They tried to make convoluted sentences that were still valid of course. They ended up laughing and enjoying themselves so much. Both kids concluded Sunya was such “an awesome game!” 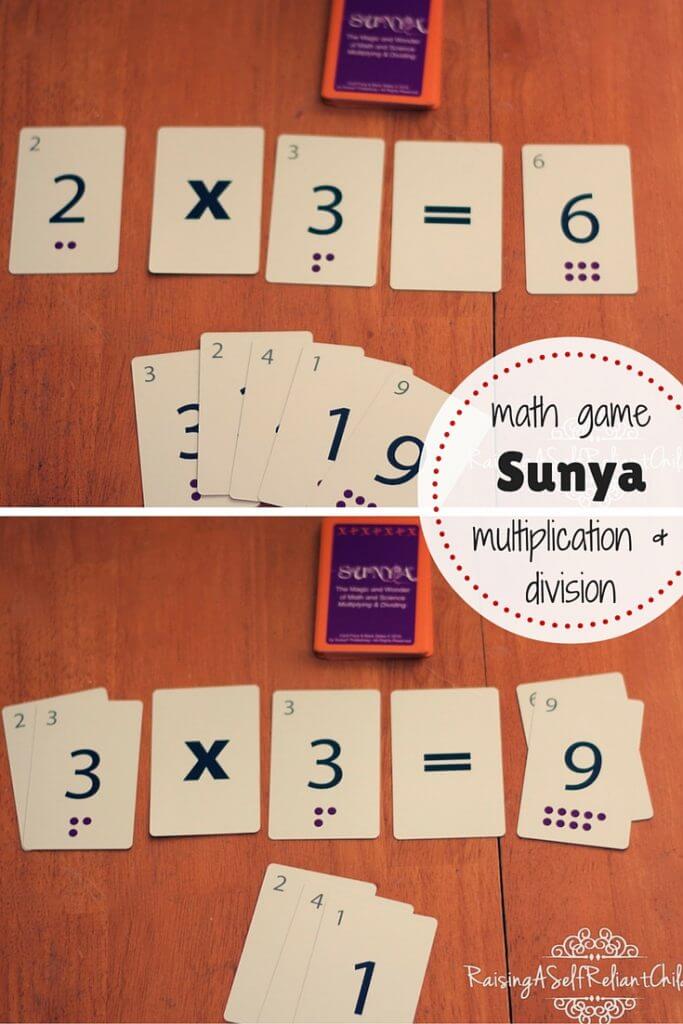 The riddle card deck is also good fun. Some questions really get you thinking, and even if you end up looking the answer up, it’s a great way to try to solve math problems and brain teasers.

I rated it 2 stars (it’s usually Super Hero who does the ratings) for Open and Go! because of the lengthy, unclear instructions. Once you get past them though, you’re in for much learning, or practicing or even sparking good creativity!

It’s curious that the author has named the game “The Magic and Wonder of Math and Science.”  I didn’t find any science. Not yet anyway.  Not in the traditional way one thinks of science anyway.  He obviously must be referring to math as a science, which, well, it is!

Do We Recommend It?

If your children are getting started with multiplication and division, Sunya offers a very entertaining way to practice their tables and math facts. I appreciated that it’s flexible and that the children can introduce their own creative twists to the game. Also, if you have younger children learning addition and subtraction, make sure to read the reviews from my fellow Crew members who used that version of Sunya. Of course, you can also read more reviews from the multiplication and division version as well.

Children love to play games, so really, one can never go wrong opting to learn using fun creative goodies such as Sunya – The Magic and Wonder of Math and Science – Multiplication and Division!

I received a free copy of this product through the Schoolhouse Review Crew in exchange for my honest review. I was not required to write a positive review, nor was i compensated in any other way. All opinions are my own or those of my family. I am disclosing this in accordance with the FTC Regulations.

Mega Fun Multiplication Game – Mental & Physical Exercise All In One