“Well, my son is not yet 11-14, nor is he in 6th to 8th grade. He’s 9 years-old, still too young for Pre Algebra.”  These were my thoughts as I approached the Crew’s application for UnLock Math.  I had a clear intention to opt out.   Then, one of the choices said: “I have a student who might be advanced enough to try this program.” Hmmm.  That kind of sounds like Super Hero. So, encouraged by UnLock Math’s claim that its method was gentle and effective, even for might-be-ready youngsters, we eagerly gave UnLock Pre Algebra a try. 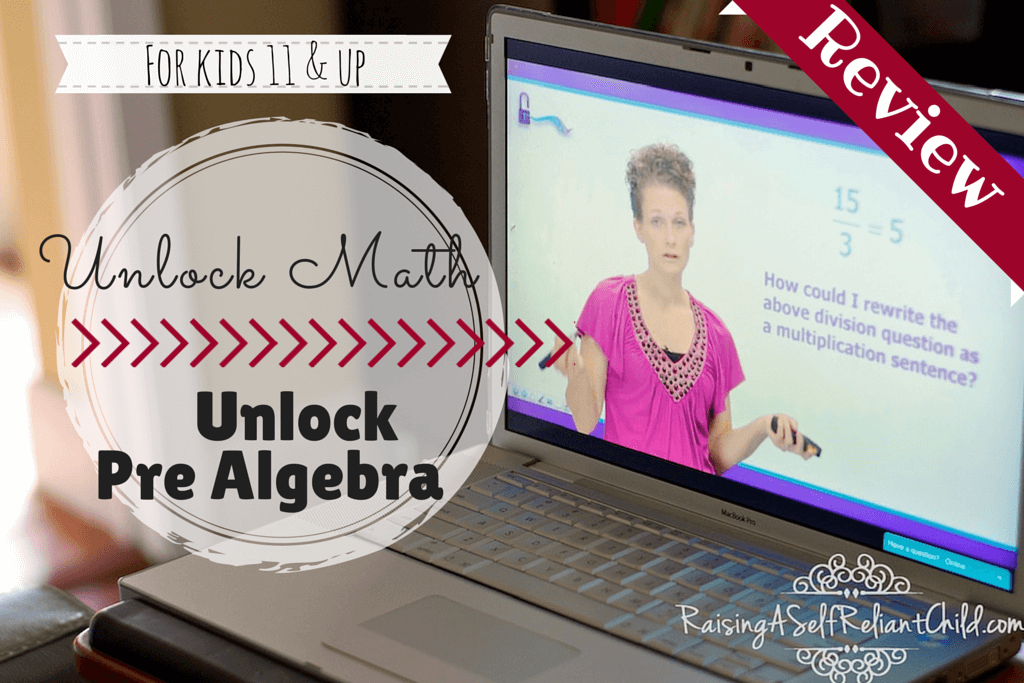 So, we did. We received a subscription for a full year for UnLock Pre-Algebra from UnLock Math.   In exchange, I committed to deliver my thorough and honest review.  A  subscription costs $299 yearly, and $49 monthly.

UnLock Math is a newcomer in the Math eLearning arena.  It’s a brand new website.  Matthew and Alesia Blackwood, its creators, have put a lot of effort into developing a site that’s compelling and easy to use. 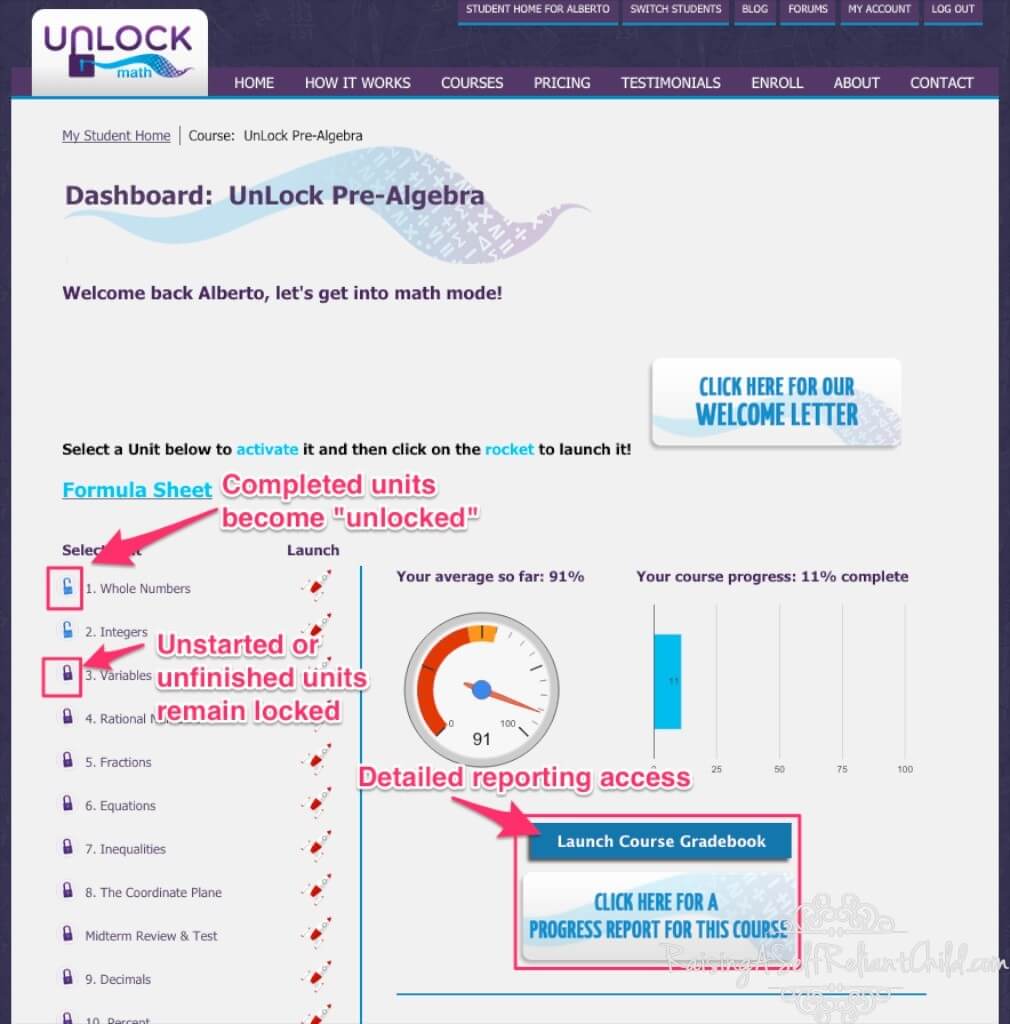 To start, the child is greeted by the main dashboard as soon as he logs in. Here, he can easily see the course outline, the next lesson in the sequence, progress and grading reports. 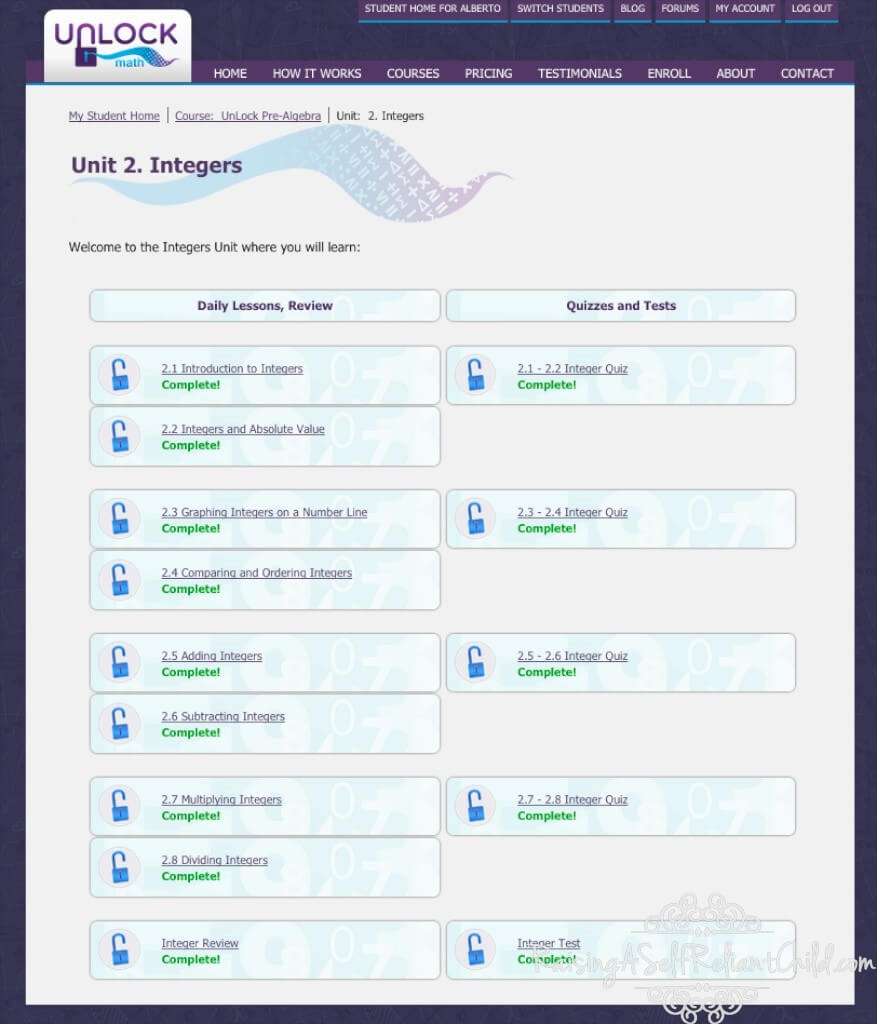 Clicking on the unit’s small rocket icon fires it up and yields another window with a visually organized list of lessons, reviews, quizzes and tests. 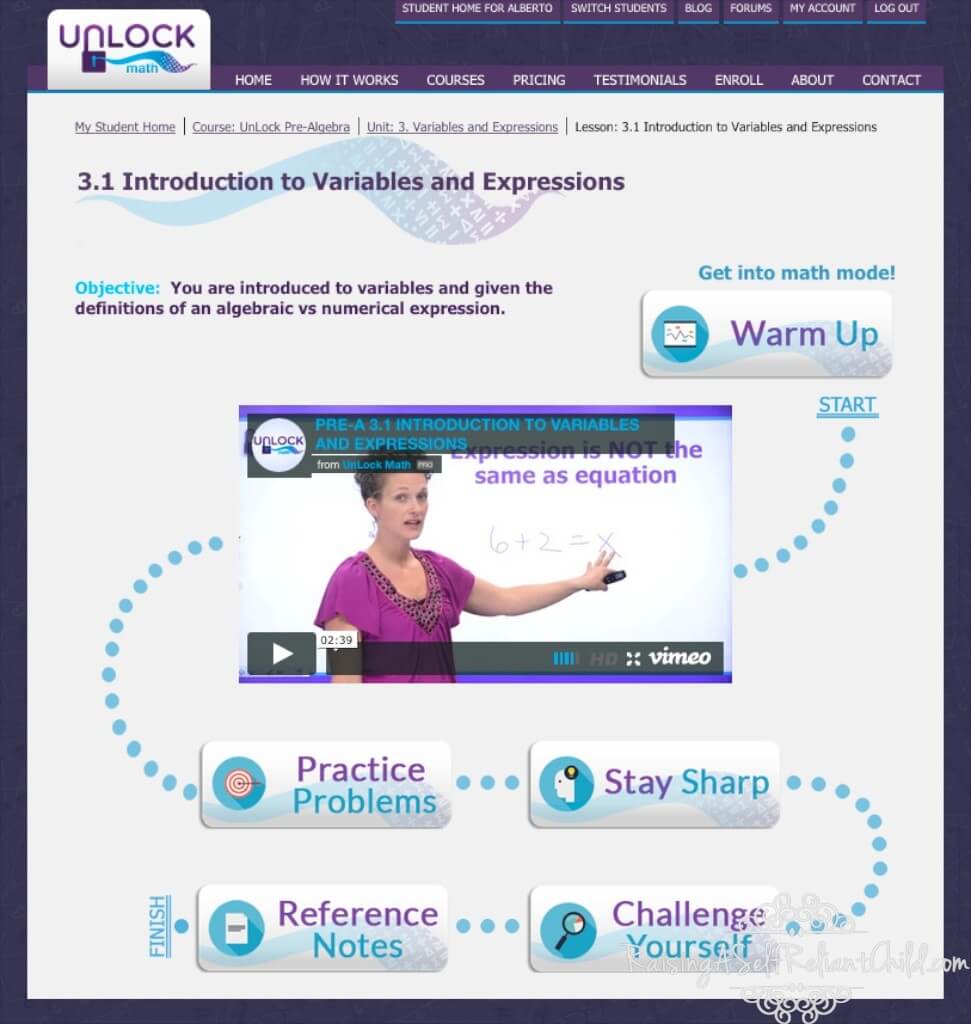 Lastly, each lesson is again rich in visual cues as to where to begin and what to do next at all times. 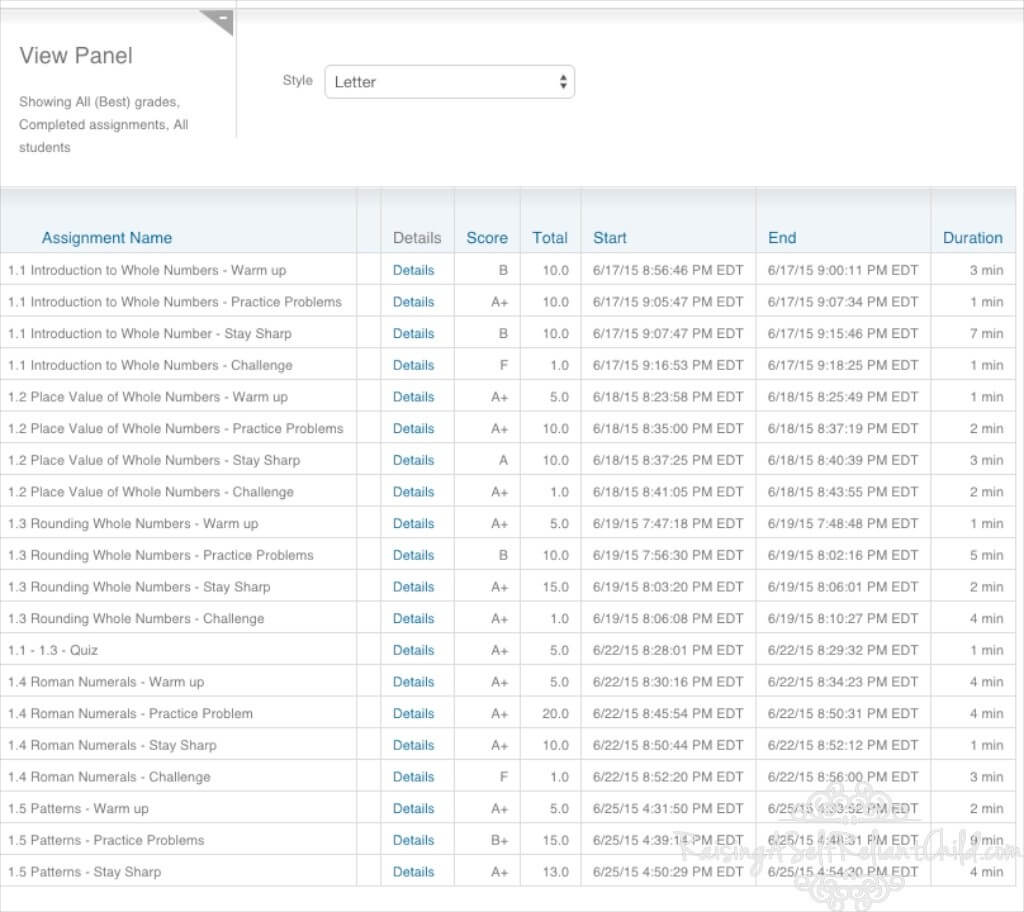 Both, the child and parent can access the grading/progress report from the dashboard.  It’s possible to view it by letter grade, or percentages or points earned. Super Hero always chooses “Letter” view.

The child may repeat the Practice Problems and Stay Sharp segments unlimited times, and the video explanation too, of course.  I suppose one can repeat the Warm Up as well, though we’ve never tried that.  Challenge Yourself is a sort of extra credit section to be done once only.  It’s either right or wrong. A or F. No second chances here. Yikes!

How Have We Used UnLock Pre Algebra?

Using UnLock Pre Algebra is as straight forward as it gets.  Login, launch the unit, launch the lesson, follow the dotted path.  Super Hero has been using this about 3 to 4 times per week during the last month and a half. At the beginning, since we were trying to determine if he was ready for the program, I sat dutifully next to him. Now that we’ve seen he’s handling his lessons so well, he still expects me to sit along.  I gladly comply. I enjoy listening in and following along.  I may not be able to continue quite so obediently, the program is after all, designed to be done independently. But so far, it has given me the chance to get an adequate feel for the program.

Overall, I found UnLock Math to be an excellent program. It uses MapleSoft’s technology as its backbone. MapleSoft is a state-of-the-art eLearning platform specifically developed for science, mathematics, and engineering.  Thus, the program seems elegant and sophisticated.  Not just in its look and feel, but in the quality of the pedagogy as well. 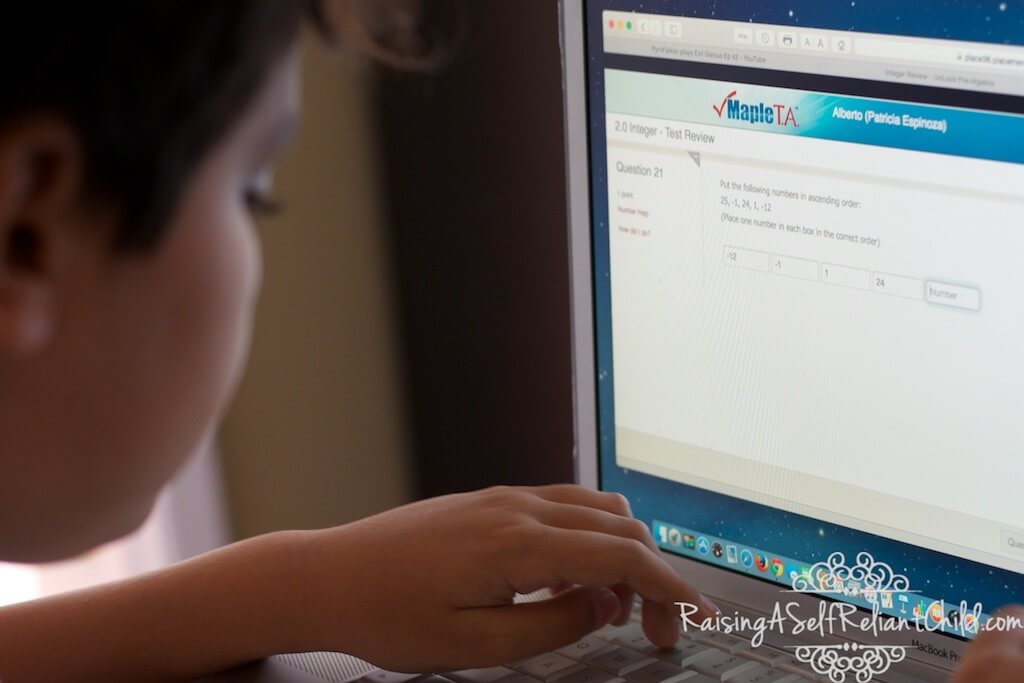 One of its main strengths is that the questions are not supposed to be strictly multiple-choice, but rather they adapt to the child’s level.  This is the claim anyway. And though the questions seem varied and some complex, the child does have to pick from a selection of choices, most of the time. 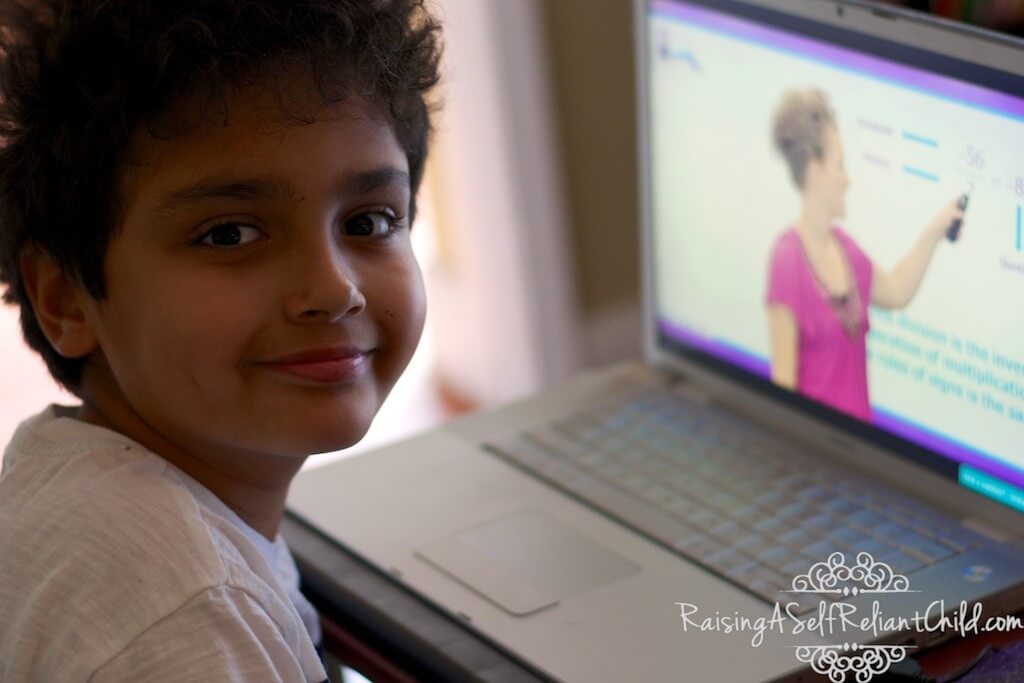 I have never seen a smart board in action so please don’t take my word for it, but I believe Alesia uses one to deliver her presentation.  The result is clean, uncluttered and pleasing.  I have seen many other programs with plenty of graphics, words, sound and video effects, some top of the line. Yet having Alesia, herself, in the forefront of her intelligible explanations, make her videos quite likable.

Aside from the Videos and the Practice Problems, I appreciate the Warm Up and Stay Sharp sections.   Retention can easily be the Achilles heel of many math online programs. The Warm Up and Stay Sharp sections effectively increase good retention chances by constantly bringing up operations and concepts.  Likewise, the Challenge Yourself is a fun way to end the lesson by keeping Super Hero on his math toes 😉   Though sort of moody (A or F, remember?), this is my personal favorite. Super Hero’s favorite is Stay Sharp. He did have kind of a hard time picking among his top contenders: Warm Up, Stay Sharp and Challenge Yourself.

Alesia shows much enthusiasm teaching, that makes the soul of the program. And I appreciate it very much.  Her explanations are succinct and clear.  Super Hero though, feels a couple of her lectures have not been completely clear. I think the thing to do in such cases is to watch the video again. Isn’t that the advantage of these online programs?

I must mention (in the spirit of complete honesty and thoroughness) we encountered a few minor quirks. For example, Super Hero got a couple of exercises incorrectly graded. He got them right, the system ruled otherwise.

And lastly, one such mishap was, to be fair, out of UnLock Math’s control. The Internet browser Firefox released a new version which affected the system’s performance.  The program would not record anything Super Hero did for an entire lesson. It did mark the lesson as completed but with an unsightly F on most sections.  This dropped his 96% average to 91%. Bummer. I emailed Matthew Blackwood and he immediately called me back.  He was extremely eager offering an apology and the solution. I was extremely impressed with his customer service!  I discovered then, he had been a homeschooler himself.  It was a real nice tidbit to know.

Since UnLock Math is such a young program, I expect that these kinks will be worked out shortly.  It’s nearly impossible for a site with UnLock Math’s scope, not to have to debug one thing or another after launch. What I would like to see added, however, would be a Printables section.  As tech-savvy as some say I am, I’m still old school when it comes to Math practice.   I did ask Super Hero to keep scratch paper handy to solve the problems as he followed along so far.  Yet, I would like him to have the option to also use just paper and pencil for his math practice.

I think it’s good, could be better, but good. She could explain the stuff better.

Super Hero hasn’t fallen in love with Unlock Math, yet he’s still using it. And he doesn’t dislike it either. In fact, he might like it more than he’s conceding: He gave it all the ratings. I do want for him to continue using it. There are many advantages to this program, chief among them, the retention of knowledge. To me, the fact that Unlock Math addresses this important issue with its Stay Sharp and Challenge sections, is a big plus.

If so, there’s plenty more reviews from my fellow Crew members. Or just pay these folks a visit at any of their social media accounts. That’ll give you an immediate feel for what they’re all about: