Learning French and Chinese at the Same Time

Learning French and Chinese at the Same Time with Super Hero

Super Hero and I have gone back to our language studies of French and Chinese during the last few weeks and we’re pleased to say we’re making progress.  Our most preferred tool is an iPad app called mindsnacks which has made our learning, a game, literally. We’ve been enjoying mindsnacks so much, it’s kind of hard to put the game down.  Super Hero and I, both pick it up and compete against one another. And of course, the game competition is such a powerful motivator for any child –so no complaints with game playing, right?  I, for one, have finally gotten my Chinese numbers down (I think), thanks to mindsnacks, all while having fun with Super Hero.

Here are a few screenshots of the app. And aside from French and Chinese, mindsnacks has Italian, Spanish, Portuguese, German, Japanese, U.S. Geography and Kids’ Vocabulary. A new “all subjects pass” came out with the latest update that purchases all content for only $17.99 as an upgrade.  I think we’ll definitely get the pass! 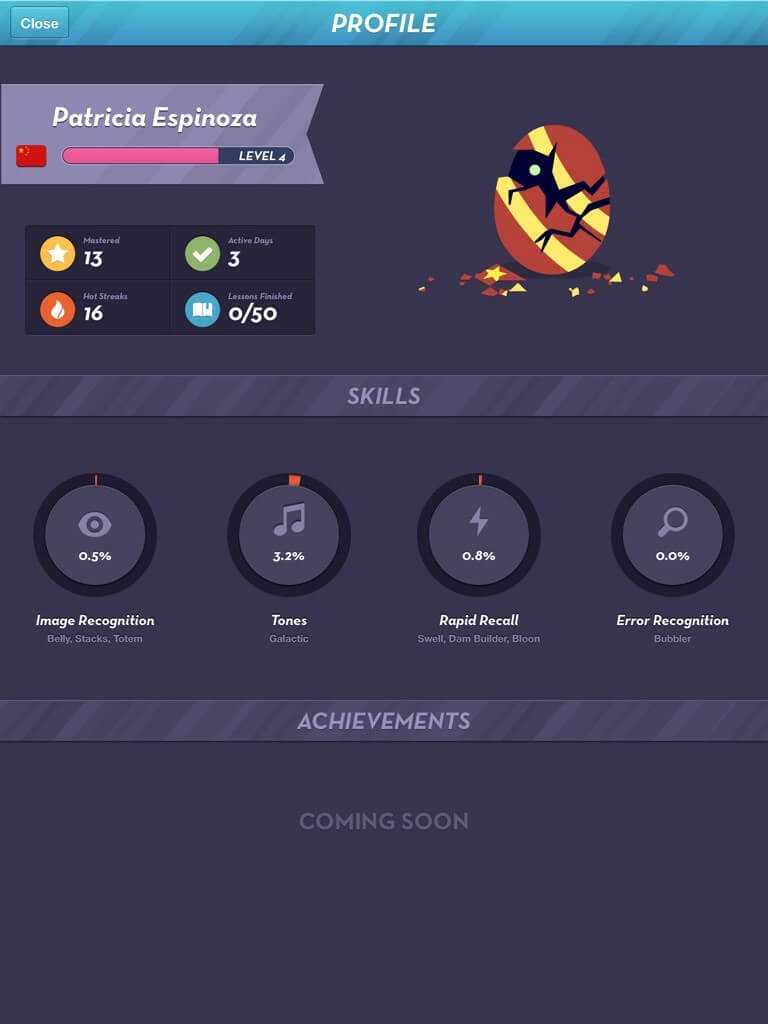 This is my profile. I’m on level 4, 13 numbers mastered, whoohoo! 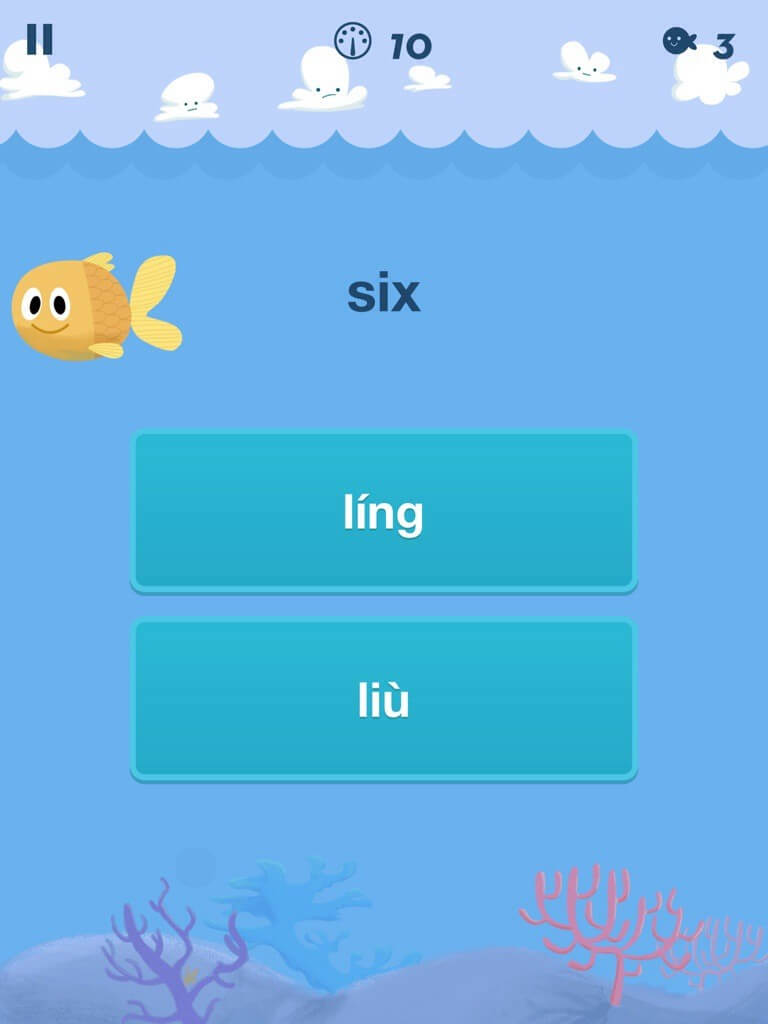 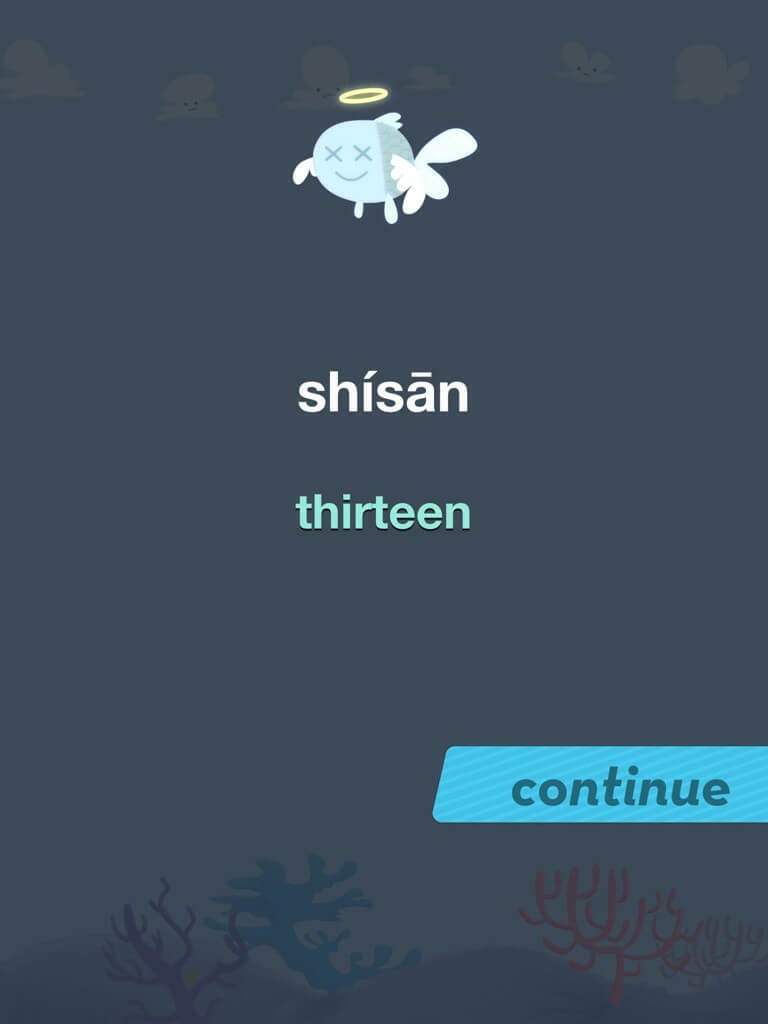 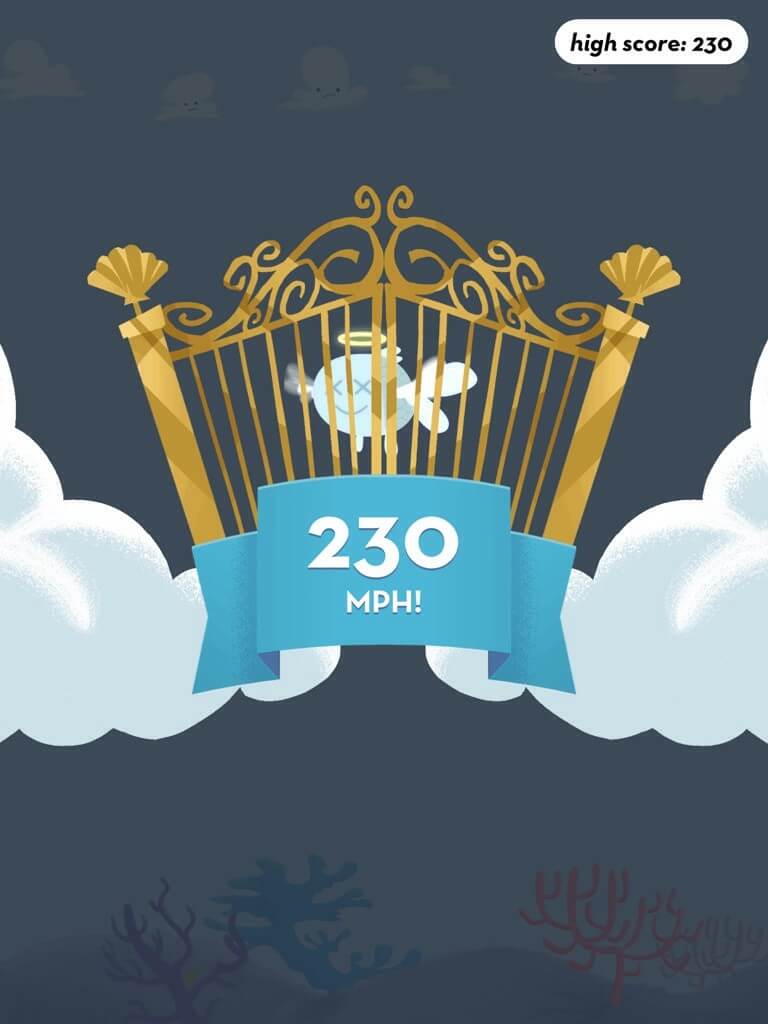 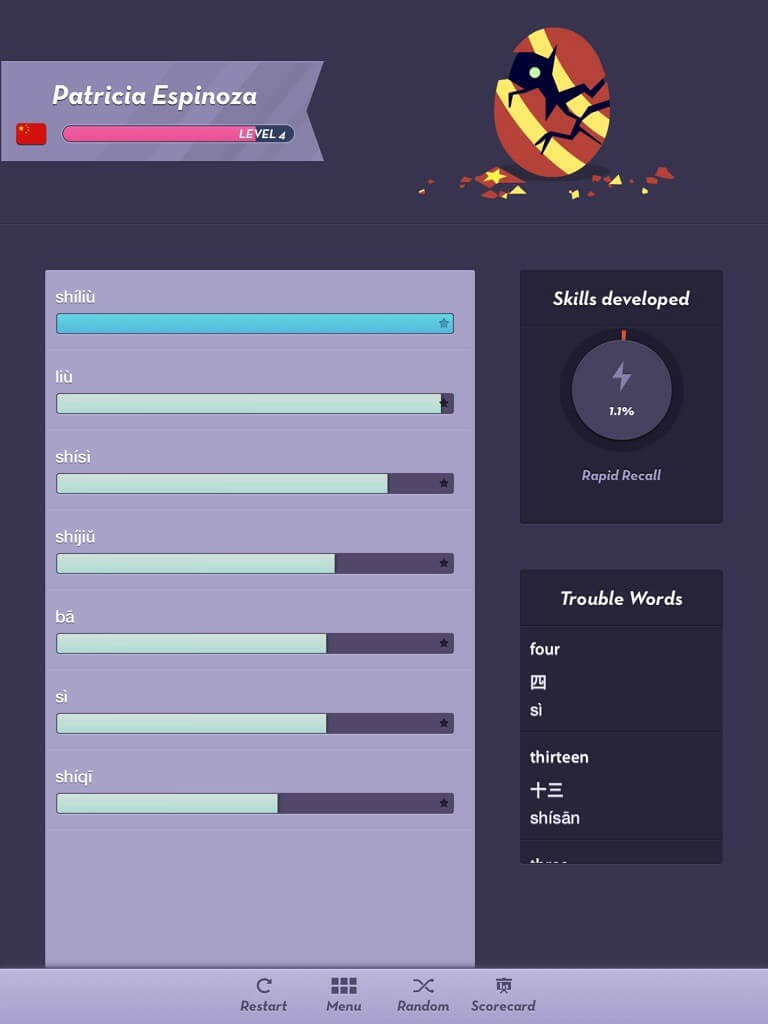 Something is hatching, wonder what it’ll be!

Another awesome app is duolingo, which unfortunately does not have Chinese, only French. Well actually it does have Spanish, Italian, Portuguese and German, but those will have to wait for now (not Spanish, though, I hope)  😉

I love duolingo and have been using it religiously, mainly because I can pick it up at any time in my iPad or iPhone, although the web version has stuff that the app does not, like discussions, and side notes, verb conjugations, etc. This is not Super Hero’s favorite only because it’s not so fast faced like a real game which mindsnacks is. So yes, I’d say duolingo is not intended for young elementary kids, perhaps the youngest users are at least higher elementary or middle school and above.

Duolingo asks you to translate from English to French, and viceversa, you get to speak and listen to yourself comparing with the native speaker in the audio portion. Its algorithm calculates which words you’ve mastered and which need more practice in order to cement them in your long term memory. Therefore, it’ll present those words/phrases to you accordingly.  Whether you can become fluent with duolingo, I don’t know yet, I’d be surprised if one can do that. But so far, it’s offered a fun way to learn together with Super Hero –we both opened accounts and became friends so we can see each other’s activity and progress. And it’s offered me a really enjoyable way to refresh the French I studied in college 20 years ago, oh my! And the very best feature: it’s completely free! 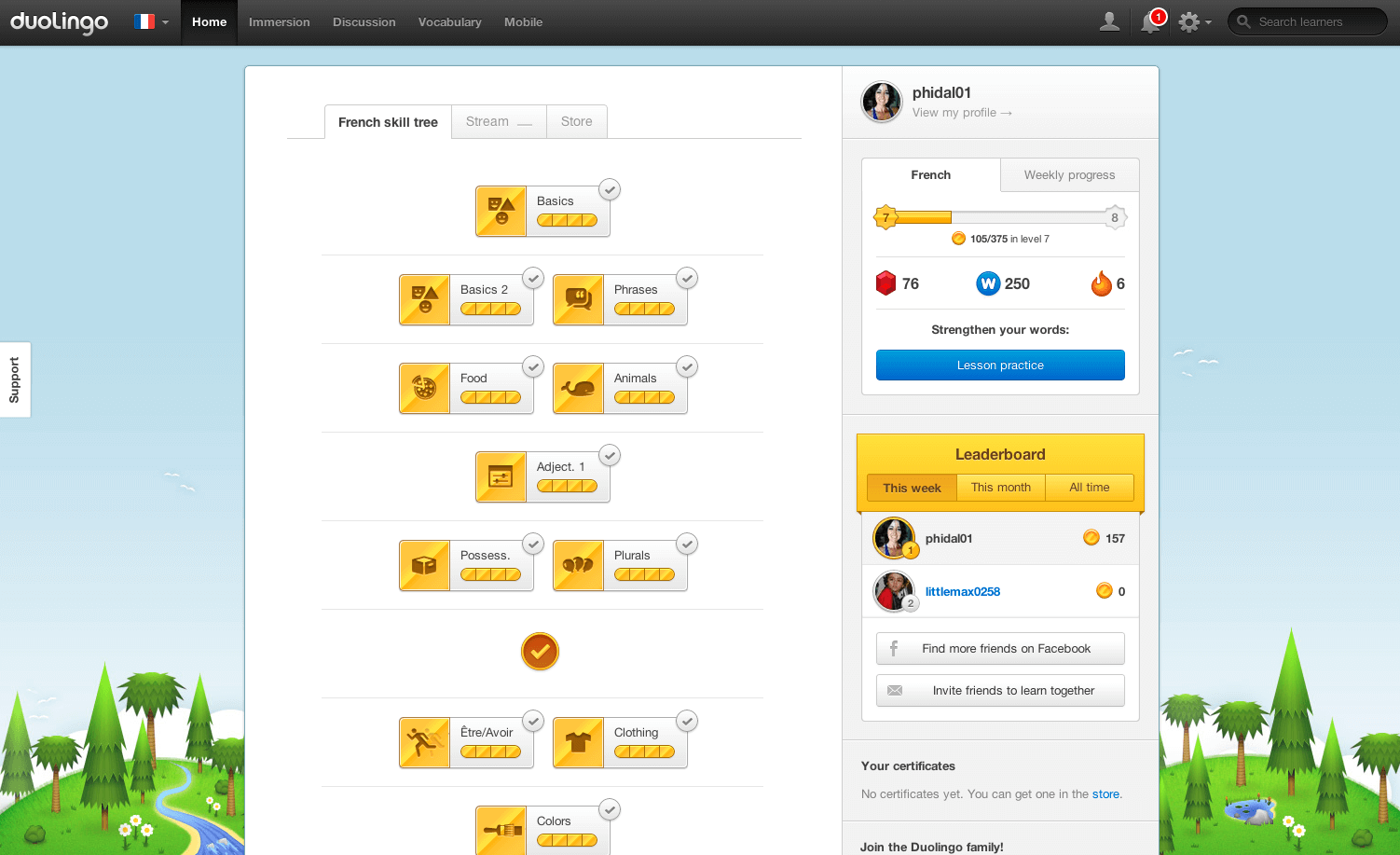 TOP French is a French TV show.  It’s a fun, fast paced contest among two kids/students of French from other parts of Europe (at least that’s what we’ve seen so far). The program is entirely in French, absolutely no English is spoken, so it may not be quite the right fit for absolute beginners. However, since the soul of the show is students of French,  all the instructions given to the contestants are very well, slowly or moderately vocalized.  It is easy to understand and follow. I interpreted to Super Hero whenever he did not understand, but really you “get it” just by watching the show.  Super Hero loves the show and I love understanding almost everything said.  The best about this program is that you’ll at least pick up the episode’s theme vocabulary, all while being immersed in real conversations, dialogs, and the thrill of the contest.  A really entertaining way pick up vocabulary and just to train your ear.

We access it through our subscription to Discovery Education Streaming, which we got via Homeschoolers Buyers Co-op.  TOP French is really fun for kids, I highly recommended. 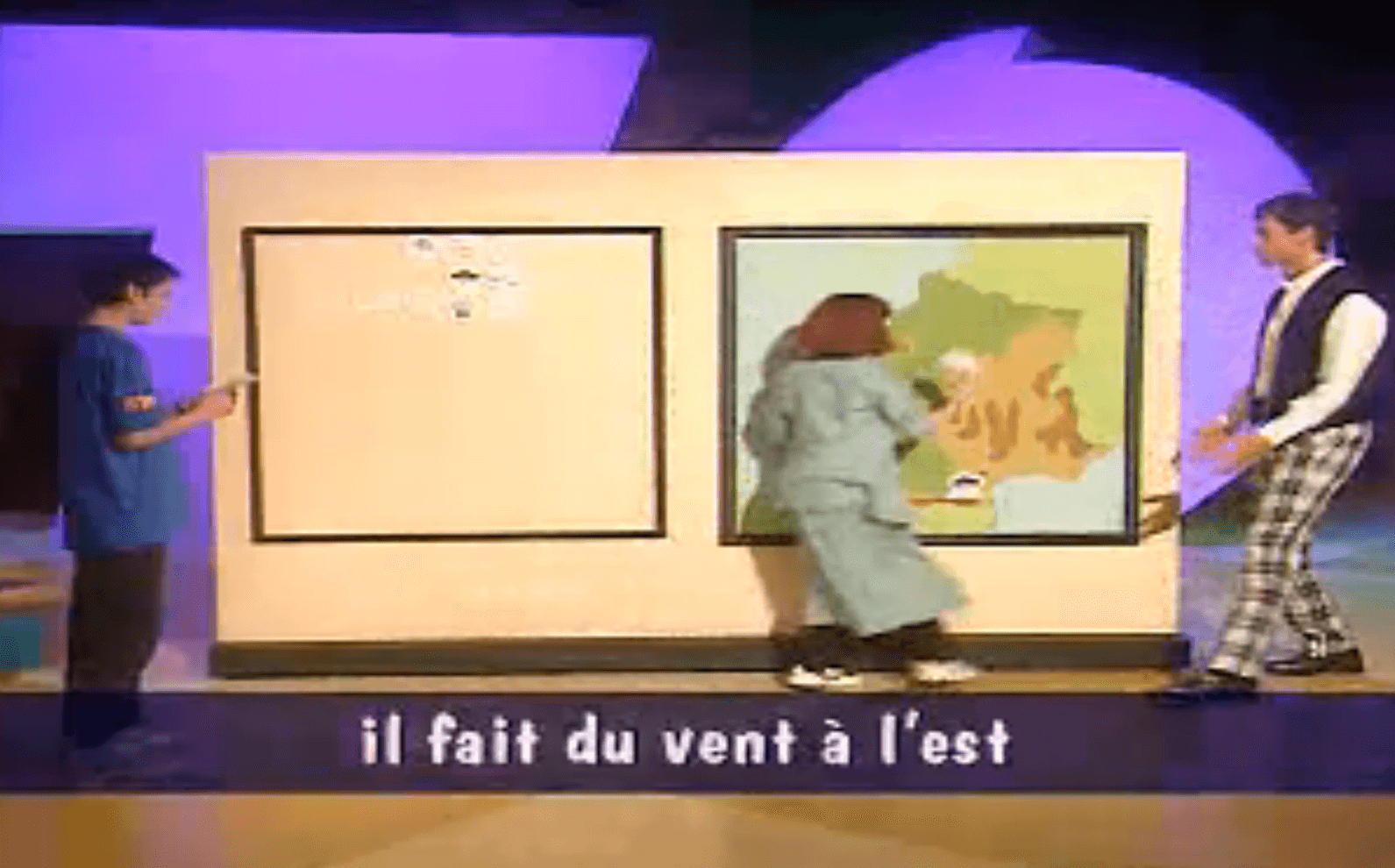 Mango languages is also free through the library. I believe, most libraries carry it, if not you can request your library to get a subscription. They offer a whooping 60 foreign language and English courses, including “Pirate”. What? Yes, Pirate!  Some kids will get a kick out of that one, I’m sure.  We have only used the Chinese course for this one, and it’s something we’ll continue to use, although the games and the mobile portability appeal of the others are a big factor for us.  To be fair, Mango also has an iPad app, however, Miami Dade Library did not opt for the package that gives you access to the app, therefore we can’t use it.  Perhaps those of you who don’t live in Miami can take advantage of the app. 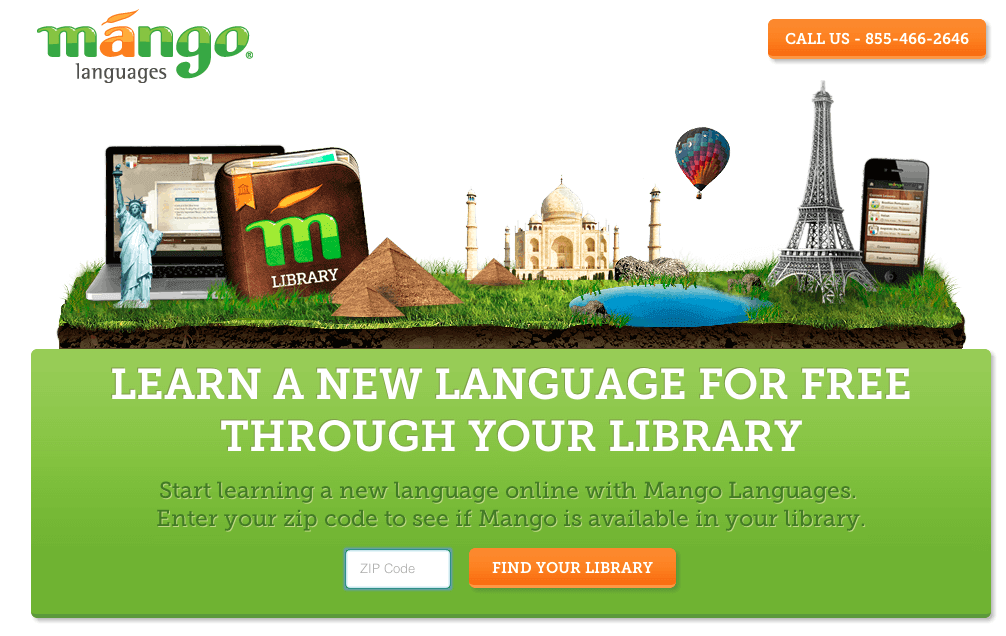 Memrise is another new breed of web 2.0 apps. We have used it the least, only because I just discovered it, but it is fun and I think we’ll use it more and more. The best is that it’s free!  There are a lot of language courses offered by different providers, so there’s plenty to choose from.  Depending on who’s providing the course, there is video, audio, and a handy nemonic feature that I found very helpful in memorizing the chinese characters, so far. 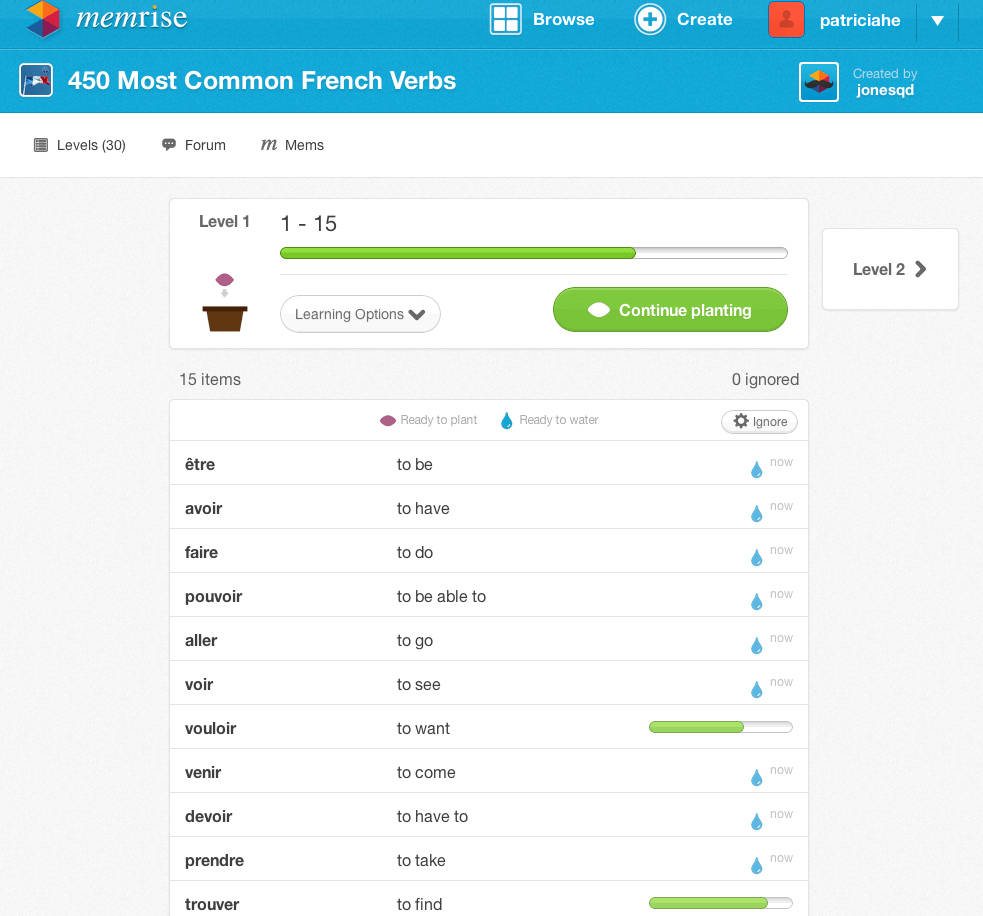 These are my top picks –with mindsnacks and duolingo at the very top–  although I do have a lot more that I’ll be sharing in another post. I think it’s best to separate them mainly because they are not quite geared to young kids, but I did find them to be sound resources, for reference at the very least.  If  there are any sites you think are fantastic like these, please do share them with us 🙂

UPDATE:    Check out my top 25 FREE websites to learn French. I will also post on Chinese learning resources soon.